Letting Go of the Day Job

I work with leaders from a cross section of organisations, helping them to transition from being an expert in their field to taking on leadership roles.  We have known for a long time that leaders often feel bereft at having to let go of the day job and try hard to hold on to it, often giving the perception of micromanaging.  Leadership courses do their best to train the new set of skills necessary for stepping up and on the whole do a good job. However, some industries in particular find it more difficult than others – industries where a high degree of risk aversion exists – engineering, manufacturing, IT, Utilities to name but a few.

The habits exhibited by potential leaders are of course an unconscious process and often don’t come to light even during the leadership training.  Habits of behaviour and thinking which have been formed over time to accommodate the role of the day job and which now need to be changed if they are to step up to the challenges of leadership.  A classic example is shown here – 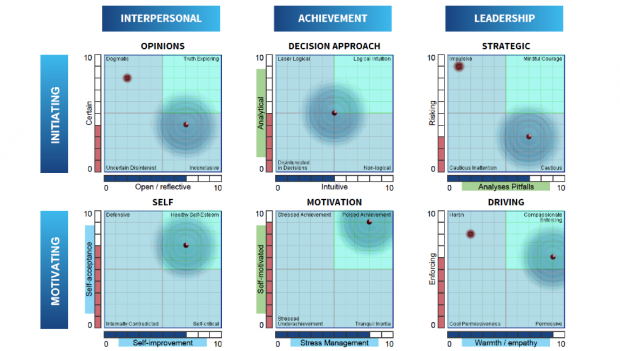 the diagram shows the top two rows (Initiating and Motivating) of a paradox report for someone applying for a leadership role. The graph as a whole shows the person’s overall approach to work and the final two rows (not shown here) are Implementing and Maintaining thus giving us a complete picture.

For now, let’s just take a look at the top row which represents the setting up of any project or work requirement. It is called ‘Initiating’ – I sometimes prefer to call it the ‘visionary’ level because nothing has happened at this stage – it’s all in the planning, in the mind, in the imagination.

Incidentally this person has scored quite highly on both the Motivating and Implementation stage suggesting that he/she is very good at implementing a strategy and motivating others to get behind it once the strategy is in place.  But now things are different.  We are asking this person to step up and become a leader which he/she may well be able to do with some training but first needs the awareness of the gaps.  The need for the skills used in the day job become secondary to those needed at the strategic level.  Take a look at the first paradox graph in the diagram ‘Opinions’ – this person has a strong propensity to be open and reflective in his/her ideas and will spend time gathering those of others.  It may take a while for this person to become certain and feel confident to express an opinion thus appearing ‘flakey’ to others.  The key here is not to stop being open and reflective but to ask the question ‘what has to happen for you to be certain in this scenario?’

Similarly, the Decision graph would suggest that this person’s approach to decision making is erratic at most thus leaving people unsure of what might happen next.  The preparedness to make a decision in a leadership role is key to success so work is needed here too.  The one I find most fascinating is the Strategic Graph.  Here we have someone who is unsure of their own opinions, finds it tricky to make a decision and is also risk averse.  This may be fine in the day job, for example, we would really not want engineers to take risks with the engineering aspect of their role but this is different. Strategy by definition has risk attached, since it has never been done before. Remember this is at the initiating or visionary stage of the work – at some point this person will have to put a stake in the ground, having analysed the pitfalls and gathered and analysed enough data.  A whole new set of skills which can be taught but need awareness first.

If you would like to know more about the unique and versatile Harrison Assessments Talent Solution approach, based on enjoyment theory, please do get in touch: